What a lovely day today having fun in the Florida Everglades.

Sun was shining when we left Florida City and as we drove up Hwy 997 to get to Hwy 41 we were surrounded by farms and nurseries.

Lots of palms and tropical plants for sale as far as the eye could see.

Finally making it up to Hwy 41 we turned left and immediately started seeing the Everglades.

Tall grasses on either side with water below and you driving right through the middle of it all.

It really is a sight to behold.

Reminds one of the prairies with the tall grasses blowing in the wind except everything is built on water.

The whole area right across almost to Naples is a National Park and is indeed a treasure.

After driving for a while we came to a sign that said… “Take An Air boat Ride Into The Everglades!” And as it was something that we both wanted to do we got out our earplugs, paid the dues and hopped on the boat.

Just like the boats that you see on TV when you get going fast and turn you slip-slide sideways. Like having poor tires on a snowy road.

The ranger was a mine of information and told us all about the area.

A few things stuck in my mind…

1 – The grasses are made up of saw grass and they are so-called because the blades are like that of a saw.

Many a person has been seriously cut by them and the ranger said he was called out on Christmas Eve to rescue some men who had gotten caught in the grass in a boat and had been trying to pull themselves out by handing onto the grass.

Turns out he not only had to rescue the boat but also put his first aid skills to work as the men had their hand literally cut to the bone. Dangerous stuff.

2 – The water may look muddy but are some of the cleanest freshwaters around as the grasses, plants and trees continually filter it.

3 – The water roads that we travelled on through the glades were built by the army during World War II for training exercises.

4 – There is a tree that grows in the waters that bears a fruit called pond apples. This was traditionally used as a hallucinogenic by the Indians but was also useful in treating wounds by pounding up the fruit and using the skin like a bandage.

Lately, it has been found to contain properties that help to reduce cancerous tumours.

5 – That although we didn’t see any the area is teeming with wildlife like otters, bears and panthers.

6 – The willow tree that stands along the banks is used in making aspirin. The bark can actually be chewed and within minutes a headache will be gone.

7 – There is a plant called an air plant that lives on air and attaches itself to branches. We even saw one further down the road on a hydro line.

If they are submerged in water for more than 10 minutes it will actually kill them. All these things we learned as we went through the swamp.

For me… the first bird I saw was a Snail Kite but it was too fast for me to get a picture.

Conversely, the last bird I saw was a Limpkin. These were both lifers for me and I learned upon getting back to the station that both these birds provide a much-needed service in the park.

The Everglades has had numerous invasive species introduced into them over the years and one of them is a large snail that can grow to the size of your hand.

Both the Snail Kite and the Limpkin feed almost exclusively on these snails helping to keep them under control. 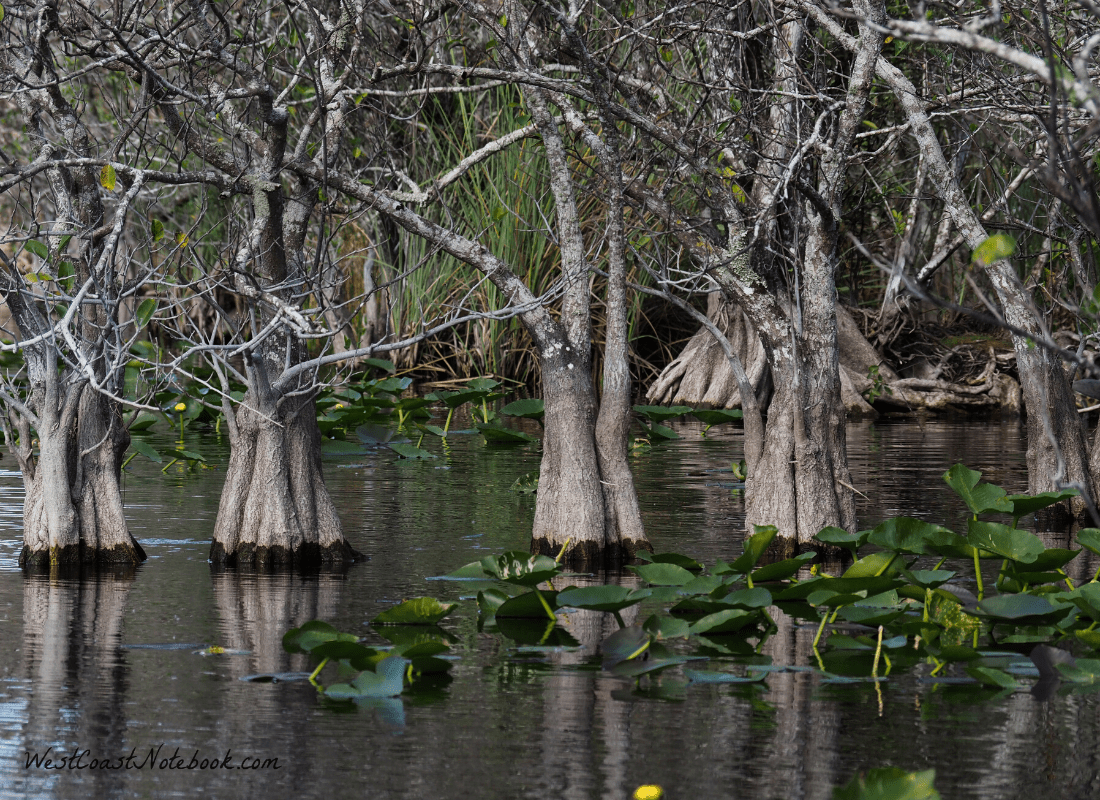 Besides those two birds, there were lots of herons, egrets and alligators.

One thing I didn’t realize was the alligators have their own territories within the park.

The rangers have names for the pairs that live in the sections of the water lanes and they can live up to 100 years old. We also saw turtles sunning themselves along the banks and although I can’t remember the name of the one below, I do know it has a soft shell and to the alligators, it’s like eating a raw egg. When we arrived back at the base station they had a 3 years old alligator that you could have your picture taken with and they explained how to hold it so they didn’t pee on you. We got talking to one of the rangers and it turns out he is a bit of a birding fanatic like myself and he told us of all sorts of places to see different birds. A treasure trove of information.

As we continued on down the road we stopped at different points of interest and there was one section that had a boardwalk along one of the canals.

There we saw more alligators than you can imagine. Big and small and in-between.

You could watch the fish and the birds hunting along the canal as well and although I was looking down on them I got a shot of a Black-crowned night heron and an Anhinga.

The Anhinga is similar looking to a cormorant but doesn’t have any oily protection to its wings so once it gets wet it needs to get out into the sun and dry off.

By now it’s getting onto twilight and all the birds are active and either hunkering down for the night or flying to where they are going to sleep.

I saw some different looking birds out in the grasses and Rob went back so I could get a look at them.

And behold they were a flock of Wood storks.

Hard to get a picture but we found one a little further down the road sitting in a tree. Seeing something odd by the side of the road Rob pulled into a parking lot where a lot of people were standing around.

For me, the point of interest was some black vultures that were hanging around on the ground but for Rob, it was a platform that people were getting off of. Turns out that it’s a large wheeled vehicle probably about 10 feet off the ground with seats on top of it and it’s a tour, driving through the everglades.

The platform was where people got off and on the vehicle. Very cool.

We got talking to the man who runs it and he was telling me about the black vultures and how brutal they are.

He’s seen them attack one of their own in mid-air only to have it crash to the ground and all the rest of the vultures tearing it to bits.

This seems to be a regular occurrence. Gruesome!

Now it was getting dark so it’s time to look for a hotel. (You really didn’t think we had booked ahead did you?)

Naples is the closest town and we first stopped at a motel to find out the price and it was $125 for a not so stellar room.

Seeing some pretty fancy hotels and lots of golf courses we were wondering if there was going to be a hotel in our price range.

Never having been to Naples before or even looking up any information about it I decided to do that tonight.

Here is what I found on Wikipedia:

Naples is a city in Collier County, Florida, United States. As of the 2010 Census, the city’s population was 19,539. Naples is one of the wealthiest cities in the United States, with the sixth-highest per capita income in the country in 2012, and the second-highest proportion of millionaires per capita in the US.

Talk about hobnobbing with the Rich and Famous.

We did find a lovely hotel/motel on a side street that gave us a good rate of $120.

It’s called the Lemon Tree Inn and if you look at the pictures we are in one of the units right beside the pool.

For dinner, we walked uptown and had seafood and ogled at the yachts tied up in the harbour.

It was a fun day in the Florida Everglades.

I was telling Rob this morning how Naples was one of the wealthiest cities in the US and about all the millionaires and his reply was “Well now there’s one more!”

He replied, “No, but I got something better… a zodiac and you.”