It took us two days but we went from Kingman to Casa Grande, AZ.

Yesterday, we took it easy going from Kingman to Parker via Catfish Paradise to Topock and onto Needles then taking highway 40 and turning off at highway 95 through Lake Havasu and back to Parker.

Last time we were here there were lots of birds at Catfish Paradise and surrounding area but not so much luck this time.

There was a very strong wind blowing. So hard I could hardly stand up straight.

So the birds were hiding and the hunters were hunting.

Neither the hunters or I were having any luck.

One hunter had his boat all camouflaged out and we got talking with him and he showed us what he had done. 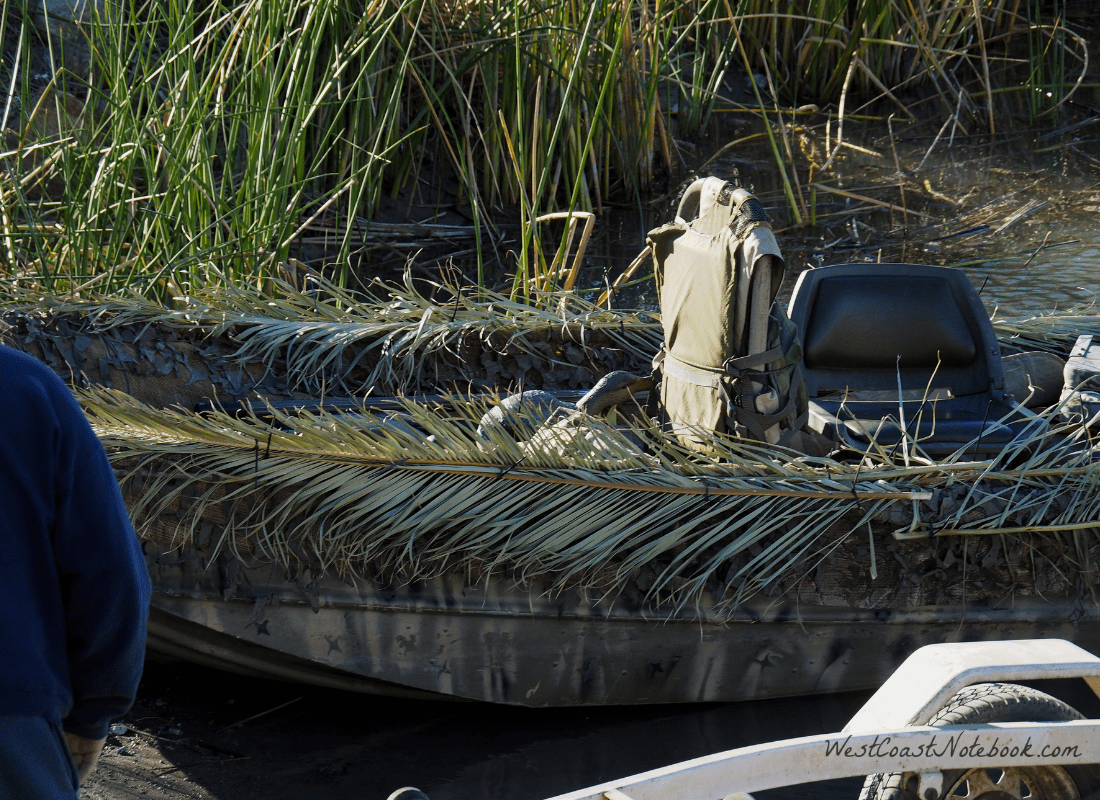 It’s not up, but he actually has 2 rails that go along each side and are attached at the front and back of the boat.

When he wants to be covered he just pulls up both sides and it forms like a tent over him and the ducks can’t see him.

I’m trying to figure out how we can attach one to our zodiac. 🙂

Turns out he’s been in Port Alberni so knew Vancouver Island. It’s a small world.

Just before we got to Needles we came upon Pirate Cove Resort and Marina so we went in to have a look, getting a 1/2 hour pass.

It’s all along the Colorado River and has huge RV sites right on the water.

They also have all sort of other amenities, but the camping spots on the peninsula were the best.

Saw a couple of ring-neck ducks, one redhead duck and a great egret and a great blue heron.

The wind was blowing everything around so I hopped back into the car and we headed for Parker.

As I mentioned before, we were following the weather.

We got into Parker in the afternoon and stopped for the day as we needed a down day from driving.

Getting up this morning Rob asked me where or what I would like to do today.

And my reply was I bought my flute all the way down here to play it in the desert and I knew the perfect spot to do so.

Leaving Parker we headed down 95 to Quartzsite where we had a walk around and looked at all the “stuff” that we didn’t need or buy.

From there we headed to the Kofa National Wildlife Refuge.

This is a beautiful, wild place where you can see for miles in all directions when you get up into the hills.

Taking the exit for Palm Canyon we passed a few campers along the way and went right up to the top.

There was only one car there and no one in sight, so I grabbed my flute, went down into a gully to get out of the wind and played my little heart out.

Occasionally when the wind was blowing my way I could hear Rob playing his flute as well.

Turns out that the people came down from hiking a trail and were looking to see where the music was coming from as they couldn’t see me.

They told Rob they could hear it all the way up the canyon and it was hauntingly beautiful as it echoed through the canyon walls.

Best review I’ve had since the lady that was painting the outhouses when we were camping said that it was the best music she’s ever painted outhouses too. 🙂

Actually, Rob and I were playing the flutes in Mexico as well and a number of people came up saying how nice they sounded.

The flutes are a big hit.

We decided to hike up the canyon and then onto to the palm trees. Well actually Rob went all the way up and I went about 3/4 of the way.

Not being able to see the palm trees and the path was rocky and steep in sections, Rob says “stay here, I’m just going up around the bend to see if they are there”.

Turns out they were around a few bends and then he came to a sign. He’s looking all around and still can’t see the trees until he looks way up a crevice in the canyon wall and there they were.

Growing like they had been planted on the steep hillside.

Coming back to the vehicle we had lunch overlooking the desert and then got on our way as there was another place to explore. Heading for Mittry Lake which is about 1/2 hour out of Yuma.

What another wonderful spot for birding and camping.

Marshes, birds and water. What more can one ask for?

It’s the type of place you would want to spend time at and sit and watch the birds.

A few people were camped along the water and some were up on a ridge and the camping was free.

We’ve found a few spots like that off the beaten path that we are going to bring a motorhome down to one day and stay for a while. Fingers crossed.

Saw a pair of grebes posturing and I was hoping to see them do the dance again, but no such luck.

From the lake, we headed into Yuma and onto Gila Bend.

In Yuma, they plant by creating canals in the soil and planting 3 rows on the top. Then they flood the field with water to keep the soil moist. Rob still felt like driving so we went onto Casa Grande which is one of our favourite places to stay and relax when coming and going to Arizona.

Great place to get to when you fly in and to stay before you head out of town as it’s only about 40 minutes away from Phoenix airport.

Next couple of days we are going to relax. Do some sightseeing and head home on Wednesday, leaving the warm weather behind.